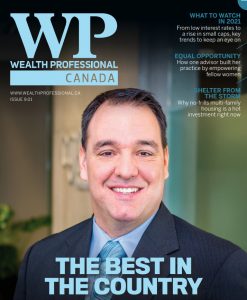 Among “The Best in the Country”

Wealth Professional Magazine has been a high profile leading industry publication for Canada’s financial management industry for several years. It offers a few different categories for awards and has a complex criteria to choose their winners for its awards.

Wealth Professional’s yearly ‘Top 50″ Financial Advisors awards began in 2016, and Rob Tetrault has won four out of six times in its history and consistently places in the top ten in wealth advisors in Canada every time. WP’s 2021 list is out with Rob placing second place this year.

The term as far as go in Canada, Rob Tetrault has continued and certainly risen in the ranks of Canada’s top financial advisors over the years to be worthy of the distinction among “The Best in the Country”.

After coming in at number six on last year’s Top 50 Advisors list, Rob Tétrault moves into the runner-up position for 2021. Tétrault had another strong year in 2020, recording the fourth highest AUM growth among the Top 50 and taking home silver at the 2020 Wealth Professional Awards for Advisory Team of the Year (Fewer Than 10 Staff). He holds the most certifications of any advisor in the Top 50, including a unique one: juris doctor. Since leaving a law practice 11 years ago, Tétrault has built a strong team and a reputation as a forward-thinking advisor.

“People had often told me that I was skilled at bringing things back to the basics,” he says. “I had also recently completed a finance MBA, so being an investment advisor was a natural fit. I made the leap and never looked back.”………READ FULL ARTICLE HERE